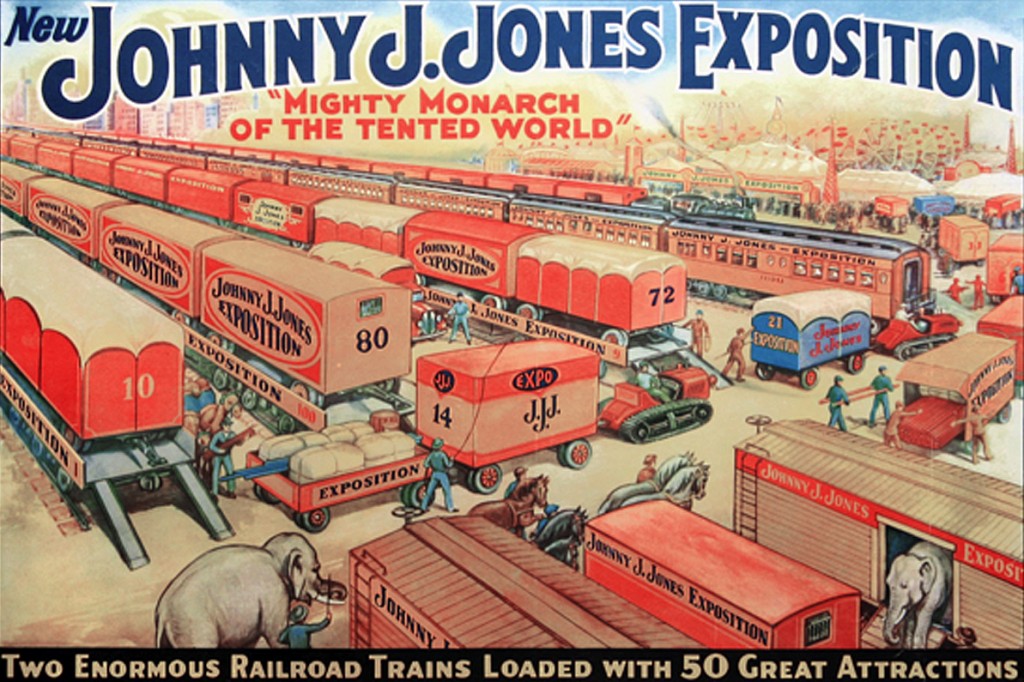 Johnny’s father, Ebenezer Jones, was a coal miner of Welsh descent born in Llanrwst, Wales. His mother, Ann Harris Jones was also born in Wales. After immigrating to America in the early 1870’s his family soon moved to Du Bois, Clearfield County.Johnny Jenkins Jones was born in Arnot, Pennsylvania, Tioga County on June 8, 1874.

At the age of ten, Jones worked in local coal mines to help support his family. Later as a newsboy he hawked newspapers and soon progressed from newsboy to “news butcher” aboard Pennsylvania Railroad passenger trains selling papers, sandwiches, cigars and sundries. “After the arrival of the 1 o’clock train Johnny J. Jones could be heard yelling at the top of his voice, “Get your Pittsburgh Gazette; all about the big fire.” In 1895, Jones invested in a cane rack booth at a local fairground. By 1899, he added a novel miniature railroad, purchased a railroad car, built his own Ferris wheel and played a regular fair route with his own gilly carnival in Western Pennsylvania titled “The Johnny J. Jones Ferris Wheel Company. In 1906, Jones added a circus attraction to the show title, the “Johnny J. Jones Exposition Shows & Trained Wild Animal Exhibition.”

Jones traveled throughout the Eastern U.S. and Canada, providing midway amusements at principal fairs including the Canadian National Exhibition at Toronto. In 1916, the Johnny J.Jones show traveled west of the Mississippi River with fairs in Iowa, Oklahoma, Nebraska, Mississippi, Louisiana and Texas. Jones was a successful showman and wore a fashionable drooping mustache that became his show business trademark. In 1917, Jones was nationally showcased on the journal covers of Billboard and Optimist magazines.

In 1920, Jones married carnival business veteran Etta Louise “Hody” Hurd. The couple had one child, Johnny J. Jones, Jr., born in 1921. In the tradition of the carnival families, Johnny Jr. became part of the show and his seventh birthday pageant was witnessed by thousands in Regina Saskatchewan when he was made a member of the Cree Indian tribe. Some 200 Indians in full war paint, beat on tom-toms and chanted war songs as Johnny Jr., his father, mother and Aunt Sue were approached by Chief Red Dog, who addressed the youngster seated on his pony. He was given the name, O-skun-a- kas-as-tay-kee-napasis, meaning in English, “Regina Boy.”

“Susie the Gorilla” earned fame on August 4, 1929, by crossing the Atlantic on an epoch making flight of the Graf Zeppolin. Susie and the Johnny J. Jones Exposition received national publicity about the journey and $2,000 was paid for her passage. At the time, she was the only female gorilla in the United States. Susie, was captured in the Belgian Congo at the age of six months, was first sold to a group of French explorers who sent her to France. Susie was shown with a variety of traveling shows. First with the Johnny J.Jones Exposition and then the Miller Bros. 101 Ranch Shows and later the Ringling Bros. Barnum and Baily Circus. In 1931, Robert J. Sullivan permanently loaned Susie to the Cincinnati Zoo and Botanical Garden. Susie was, in her day, the first and only trained Gorilla in the world. Susie’s trainer, William Dressman, taught her how eat with a knife and fork and orchestrated two performances every day. Susie was so popular that on her birthday on August 7, 1936 more than 16,000 visitors flocked to the zoo. Susie remained one of the most popular animals at the zoo until her death on October 29, 1947. Her body was donated to the University Of Cinncinatti where her skeleton remained on display until it was destroyed in a fire in 1974.

Johnny J. Jones was a celebrity and attracted famous personalities such as Thomas A. Edison and Henry Ford to shows. In 1927, Mr. and Mrs. Edison celebrated their 41st wedding anniversary at the Ft. Myers ,Florida Fair where they roamed the Midway. It didn’t take long for the greatest showman of his time to meet and strike up a friendship with the greatest inventor of all time. The Edisons were so enthralled with the midgets that Jones and the little people were invited for a visit to the Edison estate the following evening. Edison continued his friendship with Jones and visited him in Du Bois, Pennsylvania Johnny’s hometown.

Jones was billed as “The Mighty Monarch of the Tented World” and “The Midway King.” The Exposition had a reputation as a “Sunday School” operation with no grift allowed on his midway and newspaper editors provided favorable publicity. When the Exposition visited Washington, D.C., billboards posted on street cars read “Johnny’s Coming” and Johnny’s Here”. Jones attributed success to keeping the faith with the public, performers, city officials, newspapers and fair committees. One appreciative Pennsylvania newspaper editor wrote, “A home without a mother is like a fair without Johnny J. Jones.”

Jones was the first showmen to purchase steel railroad cars, and his collective amusements in America the first to reach the 30-car size. In 1928, Jones combined his two traveling carnivals into one long train of 50 steel cars carrying 100 wagons.The Ringling Brothers Barnum & Baily Circus was the only show in America that was bigger than the Johnny J. Jones Exposition

Tragedy struck when his brother Ebenezer (“Abe”) died as a result of injuries from a brutal mugging in a rail yard. Abe traveled with Johnny most of his life and worked in various management roles.

When Jones was at height of success, the American economy collapsed on Black Tuesday, October 29, 1929, and the Great  Depression enveloped the country.

Jones consumed alcohol since his teenage days and was hospitalized in the mid-twenties for alcoholism. The Great Depression was a financial disaster for Jones and he was in debt when the season ended in 1930. On Christmas Day, 1930, Jones, bedridden for two days in his private railroad car in  Deland Florida, died from renal failure at the age of 56. Johnny’s funeral was a show business event in Deland. Many showmen, fair executives, local officials and out of state dignitaries attended including a delegation from Canada and a police captain representing the District Of Colombia.

Jones’ train and circus wagons bore the slogan “Du Bois The Capital of the World” and he often returned during the summer marching his concert band to his mother’s grave at Rumbarger Cemetary. “There he heaped her grave with beautiful flowers, and his band played with such harmony and perfection as to bring tears to the thousands gathered there to see and hear.” Jones was generous to local charities and on one visit donated a children’s ward to the Du Bois Hospital .

After Jones’ death, Du Bois Pennsylvannia remained a loyal venue for another twenty years. In 1949, 7,000 visited the midway the first day. In 1950, the Johnny J.Jones Exposition played their last show in Du Bois the only financially successful show of the season. The sponsor was the Du Bois Voluenteer Fire Dept.  A large crowd turned out to greet the great show train and witness the unloading of the wagons, and there was a big parade with three local bands. It was a special occasion for the Jones family, and Johnny J. Jones Jr. and his oldest daughter Candy did radio promotions on station WCED in Du Bois, and talked about the history of the Jones family. Jones was a lifelong member of  Du Bois Garfield Lodge#559 F & A M and the Jaffa Shrine, Altoona Pernnsylvannia

The JJJ Show Goes On

Hody Hurd Jones continued to manage the Exposition from her private railroad car for another twenty years. Johnny J. Jones, Jr. also continued to manage the Exposition and at the age of 16 was Assistant Director of the show. Graduating from the Hayne Military Academy in 1939 and Stetson Law University, Johnny J. Jones, Jr. served as a B-24 pilot with the 458th Bombardment Group in the U.S. Army Air Force during WWII. Returning from a mission over Munich, Geremany on July 11, 1944 his crew was forced to bail out near the Dutch-Belgian border and was taken prisoner of war and later liberated by the Russian Army on May 2, 1945. After the war, he returned to the “JJJ” management until the show closed However, the once great Johnny J.Jones Exposition was never able to regain a full route of events and eventually ended it’s long and colorful life rotting away on a forgotten railroad siding where the IRS seized and sold the equipment for taxes in 1951

Pennsylvania historian Major Israel Mc Creight recorded, “It is sad to think of and humiliating to record, that Johnny J. Jones, who did so much to advertise Du Bois, Pennsylvannia, lies buried in an unmarked grave, in the  city of Orlando Florida. It is more evidence of the truth that public memory is short, fickle and unappreciative toward those to whom they owe the most.”

Re; …I have been through the process of having a once great show collapse around me. It is, in a word, terrible. To me, it is always a sad thing to see a magnificent tradition come to it’s end. Although one can argue that it is an inevitable evolutionary process, many lives of those ,who for generations called it’s midway ‘home’, are displaced and whole families are left to feel a sense of homelessness. It can be an emotional tragedy for those involved to hear the words “this is as far as we go”. By the time the end finally comes, the once brilliant paint is faded and peeling, the bright lights no longer shine reliably and much of the equipment in ruins.These shows are the fallen flags of our industry and their historical legacy is all that we inherit as modern showman. A somewhat hazy and incomplete trust to be passed along to those who will proceed us in the future. The few photographs that have survived open a small window into their past but that fragment of time can never tell an accurate story of the daily lives of those individuals who were so much a part of the wonderful history of those forgotten old shows. 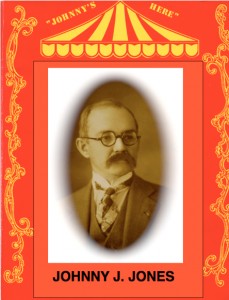