You are here: Home / Carnivals / The Life And Times of Patty Conklin And The Conklin Shows

Patty Conklin and The Conklin Shows 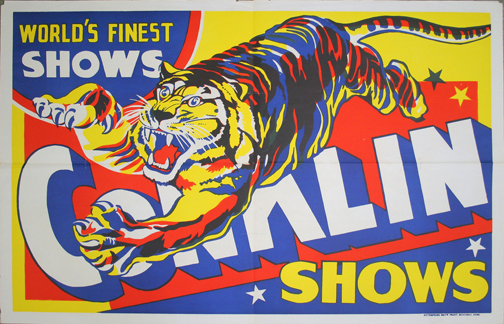 Conklin Shows was founded by James Wesley “Patty” Conklin, (b. 1892 in Brooklyn New York and raised by adopted parents — the Conklins). He got his start as a sideshow host at Coney Island in the early 1900s. By 1915 he was running his own gambling games at various midways across the southern United States. This is only a small portion of The Life And Times of Patty Conklin & The Conklin Shows.

In 1916 Patty Conklin joined up with his adopted father and established Clark & Conklin Shows. Lasting four seasons playing at various shows around the mid west, the company folded after the death of the father.

In 1921 Patty moved the show north to play at the Winnipeg Exhibition. Due to a problems with the fair, their participation was canceled. While returning to the United States with a train car full of prize merchandise, Patty stumbled upon a show just outside of Winnipeg. They joined up with the operator of the fair, International Amusement Company and worked all of the remaining Canadian shows that year.

After working the road hosting small fairs coast to coast for 20 years, Conklin Shows bid on and won the midway contract for the 1937 Toronto Canadian National Exhibition, which the company won. The fair, one of the largest in the world, was a prized show.

Having the CNE contract helped turn it into a profitable company In the early 1950s Conklin Shows borrowed over half a million dollars and began to build permanent attractions on the CNE fairgrounds of Exhibition Place. In 1953 they constructed the Mighty Flyer, a wooden roller coaster, that lasted until the early 1990s.

The early 1970s saw the company begin to diversify, including establishing Maple Leaf Village (now Casino Niagara) in Niagara Falls Ontario along with running a venue at the base of the CN Tower in Toronto.

In 1975 Conklin Shows biggest rival, Royal American Shows declined to return to fair dates in Canada due to later disproved charges of tax evasion. In 1976 Conklin was awarded the contracts previously held by RAS – including the Calgary Stampede and Vancouver Pacific Exhibition, largely due to Conklin being a Canadian business.

The 80s and 90s were a time of growth for Conklin as it operated across the prairies with stops in Winnipeg, Edmonton, Calgary, Regina and Saskatoon. It also opened up a number of smaller fairs as well as provided a schedule and route for many smaller independent shows such as Lauther Amusements and Billy Truax Amusements. These companies although bound by contracts to the larger Conklin Shows operated as separate shows.

Conklin also added many of its super spectaculars, some of which were never seen north of the border. Conklin was the first and only show in North America to have a traveling double loop roller coaster which took 28 trailers to move. This mammoth coaster named “The Doppel Looper” only made the trip as far north as Toronto and even this was not financially feasible after the late 90s. Along other rides that were one of a kind in a traveling carnival, were the Drop of Fear, the G-Force, and The Mark 1 roller coaster.

N.A.M.E. provides rides at over 145 fairs and events yearly. Now included are Cinco de Mayo in New Orleans as well as the Dade Co. Fair, The Illinois State Fair, the Kentucky State Fair, the Indiana State Fair, and the Big E Eastern States Exposition. New and more expensive rides have been added to its line-up but at the cost of many of the old favorites. Frank Conklin while owning part of N.A.M.E., has left the management of the combined company to others.

Below you will find a link to five, separate, ten minute clips that encompass an hour long feature program, The Life And Times of Patty Conklin and The Conklin Shows. Click the bottom of the picture to start the series and go to the next one from the red advance at the bottom of the frame.

This is not some sugar coated biography but an in depth look into the life of a great showman, Patty Conlin.