You are here: Home / Carnivals / The Wreck of John Dillinger’s Car 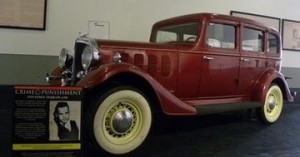 You won’t believe what happened to John Dillinger’s Car – I was there for the whole thing . . .

As a kid I grew up around the Drago shows, a wonderful, small show that played primarily around Indiana.

The problem with a small show in the Midwest was that, due to the cold Indiana winters it opened up on the first of April and closed in October leaving me without a home or visible means of support for about 5 months.

I was 15 when we played the last date, winterized the equipment and put it in the barns for it’s cold winters sleep.

As luck would have it Gooding’s Show was playing a street fair in Auburn, Indiana a short distance away and I knew I could find a weeks work and a place to sleep sweeping counters in Bill Bell’s bingo but after that I would be on my own as this was their last spot of the season as well.

All went as planned and as the date in Auburn drew to a close I tried to figure my next move.