You are here: Home / Carnival History / History of The Railroad Circus And Carnival In America

American Railroad history with the Carnival and Circus

Factual History of The Old Rail Road Carnival and Circus 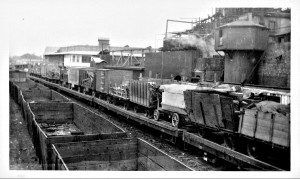 The American circus is older than the country itself. The first circus troupe of record dates back to 1724 when a small troupe gave its first performance in an open arena outside of Philadelphia.

The first complete circus performance is generally ascribed to John Bill Rickets who built an amphitheater in Philadelphia and gave his first performance on April 3, 1793.

President George Washington was an avid circus fan and attended Rickets’ Show on April 23 and 24, 1793.

By the early 1820’s there were approximately thirty animal circuses touring the eastern United States. These shows moved at night by wagon, over country roads, often mired in mud.

During the heyday of the railroad circus, these shows would become known as “Mud Shows” for obvious reasons. There had been an occasional attempt at railroading by a few of the early shows, but most went back to the wagons and country roads after only one season.

Eventually, the term, “railroad show,” became synonymous with large circuses and carnivals. In the early years, people began to think that if a circus or carnival traveled by rail, it had to be modern and big.