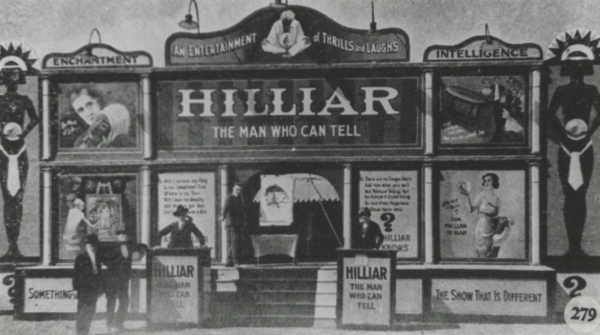 Hilliar – The Man That Can Tell

William John Hilliar was a professional magician that performed in vaudeville in the 1900s.  He ghost-wrote Howard “Thurston’s Card Tricks” (1901) He also ghost-wrote T. Nelson Down’s book “Modern Coin Manipulation” and wrote his own book “Modern Magician’s Hand Book” (1902). and wrote the column on magic for The Billboard Magazine “Magic and Magicians” page for many years.

He was also close friends with Houdini. “That friendship will always stand out as one of the dominating factors in my life,” said Hilliar.

He once performed, in disguise, as Howard Thurston while Thurston was sick and got a standing ovation. Became known as “Big Bill Hilliar”.

Hilliar worked mainly in American circus sideshows and outdoor shows, first as a performer, and later as a manager in charge of the side shows.. For many years he was with the Barnum and Bailey Circus and other large circuses.

Mentalist and fortune tellers were all the rage at the turn of the 20th century. Even the Great Houdini found interest in this area and because of his training in magic, set about in the 1920’s on a crusade to debunk practicing spiritualist as frauds. (a practice that cost him his friendship with the great writer Sir Arthur Conan Doyle )

Shows like these provided entertainment that delighted the rather naive crowds of that period.

They should not be confused with fortune telling “Mitt Camps” which promised to tell your future by reading the palm of your hand or the bumps on your head but were often nothing more than ‘clip joints’ and run by pickpockets and bunco artist.
I wish I could buy a ticket to go Hilliar Mentalist Show today…