Old Fair Rides of The Past Include The Aerio Cycle 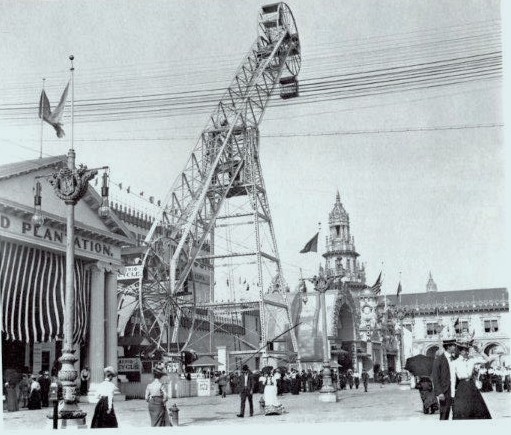 After George Ferris brought his massive Ferris Wheel to the Chicago World’s Fair in 1893, other talented inventors got on the ride building band wagon.

The Aerio Cycle, a star of the Pan American Exposition of 1901 in Buffalo, looked like a giant See-Saw. One end of the huge sweep was lowered so riders could get on and off then the sweep was tilted the other way raising the passengers 275 feet above the Exposition grounds. Old rides of the past were definitely imaginative and innovative.

The Aerio Cycle was designed after a similar ride Fred Thompson premiered at the the Tennessee Centennial Exposition in 1897. A steel tower was constructed 140 feet tall and from that fulcrum a ‘walking beam’ was built 240 feet in length. At each end of this beam were two wheels 40 feet in diameter. Each wheel had four car capable of carrying 18 people each.

For 25 cents ($4.99 in 2000 dollars), a visitor would board a car which turned round as the walking beam lifted the wheel high in the air. When you reached the top-most angle you would be 275 feet off the ground.

You had ten minutes thus suspended, slowly turning, to look around the sparsely developed area of North Buffalo. People particularly liked to ride after dark because they said it was the best view of the illumination and the city. 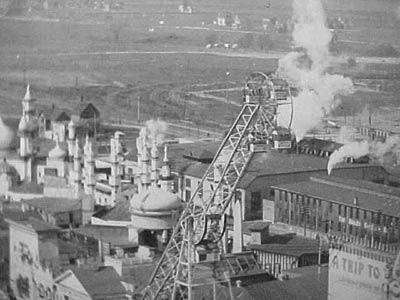 The Aerio Cycle’s beam was lifted by a 40 horsepower generator using a worm gear. Each wheel turned by a 14 horsepower motor.

The Aerio Cycle was illuminated at night by 2,000 bulbs. Concessionaires

Fred Thompson and Skip Dundy partnered in producing this ride, which Mr. Dundy said cost them $40,000.

Could this ride have been the idea behind the concept of the Velare Bros. Sky Wheel a couple of decades later?