You are here: Home / Vintage Carnival Rides / The Early Days Of Powering The Merry Go Round and Other Riding Devices In America

How The Merry Go Round Got Its Start In America 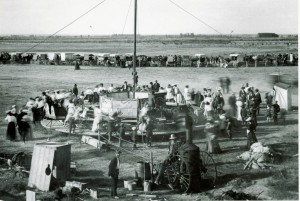 An example of an early “Steam Jenny” in Blackfoot, Idaho…1905

When traveling amusement devices were in their infancy, one of the first was a Merry-Go Round or Carousel.

The name Carousel is derived from the name “Carry Us All” which was the name used in advertising for the first such production model riding devices of this type built by the Parker Carousel Company in Leavenworth, Kansas.

Electricity had yet to be realized and reliable gasoline engines were still being invented and the means of powering these riding devices was relegated to mules.

Although their speed and performance was limited, they were quite proficient at these types of tasks. A female mule or “Jenny” was more docile and less obstinate than a male or “Jack” and easier to handle so these animals were preferred by the rides owners. The name “Jenny” stuck and has been carried along throughout the decades by seasoned show people to this day as an acronym for the ever present Merry-Go Round.

As steam power came along, it replaced the often cranky animals who required veterinary maintenance, feed, and specialized transportation. It also increased the speed of the ride which gave it a more thrilling appeal to patrons. The age of steam power was short. The voracious appetites for fuel and water made these beasts labor intensive and constant attention was required to keep steam pressure levels regulated. The quality of steel and iron used in the boilers in those days was undependable and occasionally a structural  failure or over pressurized boiler caused an explosion that would kill or maim anyone near it.

As time progressed, the production of small, portable gasoline engines, primarily developed for use in farming provided a better solution to the motive power problem for ride owners of the day. The new inventions were adapted by the fledgling outdoor amusement industry and they quickly replaced the steam engine.

As the years progressed gasoline engines were replaced by more efficient and dependable electric motors which always started, ran reliably in every type of weather, never ran out of gas and required almost no maintenance. On today’s  modern midways, lighter, smaller size electric motors developing the same horsepower as their older large and heavy counterparts, combined with modern hydraulics and advanced computers, make them the main means of propulsion on all carnival and amusement park riding devices including the stalwart Merry Go Round.