Bad Girl of The Reptile World 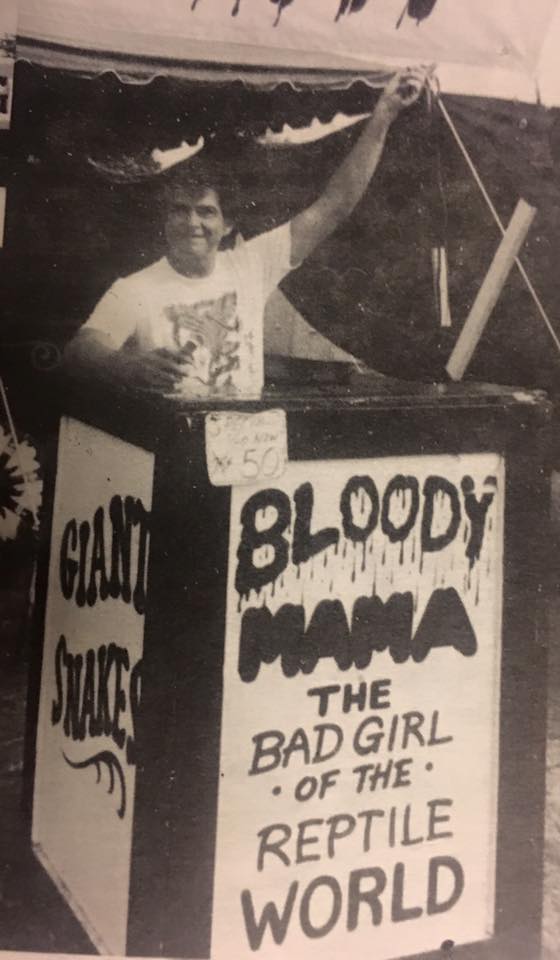 The photo shows the late Dean Potter, a veteran and well respected showman, in the ticket box of the Bloody Mama reptile show.

On most mornings a collection of eclectic individuals can be found enjoying breakfast and coffee around the tables at the Showtown bar and restaurant here in Gibsonton. They range in stature from retired carnival and circus folks to prominent show owners. The one thing they all share in common is the diversity of their memories of many decades on the sawdust trail. The object seems to be who can outdo each other with colorful stories and no showbiz subject, no matter how raunchy, is off limits.

One of my favorite recent stories involved “Bloody Mama”, a massive boa constrictor owned by the deceased Sailor Katzy who lived many years ago in the area. Sailor was a tattoo artist, banner painter, and showman who, with his wife had seen decades of life on the midways of America and was now semi retired in the outlying ‘Gibtown’ area. As was his custom, Sailor appreciated a libation now and again and often could be found dozing away in an inebriated state in the lazy summer afternoons under the shade of his favorite palm tree in the backyard.

His huge boa constrictor, who after many years was now a beloved family pet, seemed to have a fondness for this particular palm tree as well and would often climb up and sleep in the fronds while Sailor dozed peacefully below. One day while napping, old Sailor suffered a massive heart attack while reclining under the tree and as he thrashed about in his final moments, his movements caused some curiosity in the huge reptile who proceeded to slither down to see what all the fuss was about.

A neighbor found the deceased Katzy with the giant snake comfortably resting on his chest and assumed he had been killed by the vile serpent. He excitedly called the law enforcement who was quickly dispatched to the scene to investigate. With guns drawn they made a quick assessment of the situation and set about dispatching the monster in a hail of gunfire. By this time Sailors wife was on hand and understood what had actually transpired. Seeing the cops about to shoot her beloved snake, she bolted across the yard throwing herself over Sailor’s body and the sleeping snake and roundly cursed at the cops who, with understandably surprised looks on their face, reluctantly holstered their weapons and backed down in confusion.

The story could well end there but Mrs Katzy, being the quintessential showman that she was, decided not to miss such a golden opportunity and quickly set out on tour with her much beloved snake. She donned the black garb of a distraught and grieving widow and with the many exaggerated newspaper clippings that were erroneously reported by the confused press, proceeded to promote the show as “Bloody Mama, the giant serpent that ate my husband”.

I can state with absolute assurance that the Showtown Restaurant will never be known for its five star cuisine and impeccable ambiance. As a matter of fact, the chairs aren’t all that comfortable and the floors aren’t always clean either… but the jackpots at the round table, well those are always first class…..🎪 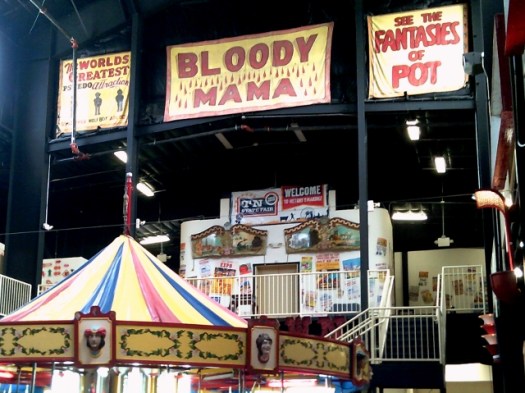