You are here: Home / Vintage Carnival Rides / The Flying Scooter 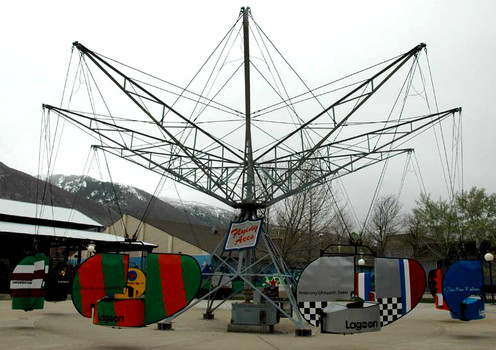 Popular Vintage Carnival Rides Bisch-Rocco, The Flying Scooters, have been around for over three quarters of a century, not bad for ride with such a simple concept.

The Flying Scooter has its roots in other carnival rides of the early 1900s including Harry Traver’s Circle Swing. Traver’s swing involved a similar rotating flight experience, but without the interactivity of the Bisch creation.

The first scooter model to bear a resemblance to today was patented in 1939 however the original patent application date was July 21, 1934.

It wasn’t long before Bisch and his business partner Ralph Rocco had a huge success on their hands. Dozens of models, eight and ten tub, portable for carnival midway use and fixed for amusement parks, began popping up throughout the mid-west.

During the boom years a lot of Army surplus parts from WWII were used on new and existing installations. It is believed Bisch Rocco Flying Scooters were built through the 1950’s but unfortunately, little record of their original history is left.

None of these rides exist on any carnival midway today and although not produced for well over half a century, there are still a few of these old girls operating in various amusement parks in America which have been lovingly preserved.

Coney Island in Cincinnati Ohio had an early set of Bisch Rocco scooters, which were moved to Kings Island when the park opened in 1972.

The ‘Flying Eagles’ were extremely popular and ran at the park until 2004, They were purchased by and are still operating today at the Carowinds Amusement Park. The Flying Eagles even launched a club of sorts, Flyer Addicts Anonymous.

A skilled rider can “snap” the cables suspending the vehicle. Snapping is caused by the cables slacking due to quick motions of the vehicle and is made easier on the faster, older Flying Scooters rides.

Today the Flying Scooter ride is still alive and well in the design concept of the Larson Manufacturing Company who produces a somewhat scaled down model for modern amusement parks. The newer models are designed to prevent snapping due to safety concerns.