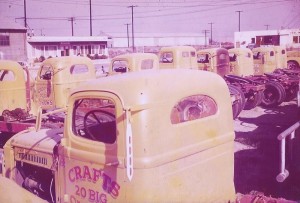 In the early 1960’s, after the death of Orville Craft, the once great ‘Crafts 20 Big Shows’ finally went to auction. The winter quarters property, in North Hollywood California, had become so valuable that it was worth far more than the show had ever been despite the shows size ( 3 big midway units)

By the time the auctioneers gavel had fallen the West Coast Shows had purchased most of the equipment. Like most carnivals during their declining years, the show had become mostly outdated junk. Many of the old ride trailers, which were actually wagons, had been purchased from a defunct railroad show and discovered to be 9 feet wide ( they were made before there were any highway restrictions on load limits ) and had to be scrapped.

The West Coast Shows made a Crafts Unit out of the best of the stuff but many of the old rides, which had set idle in winter quarters for years, could no longer pass modern California inspection standards and were sold off to out of state shows with the worst of the equipment sold to Mexico and the rest scrapped.

The old 1940’s and early 50’s trucks you see lined up were the mainstay of the Crafts Show fleet. Having driven some of them in my early years I can assure you that they were just as miserable to drive as they look but they did the job over the notorious high California mountain passes for many years (although 45 miles an hour was considered a blazing speed. Brakes were considered optional ) A couple of these were old, hard rubber tired chain drive Macks that had to be driven over Southern California’s infamous “Grapevine” mountain pass between N.Hollywood and Madeira ( West Coast Shows winter quarters ). Their average speed was between 15 and 20 miles per hour and they had to be pulled over several times on the 120 mile trip to lubricate the drive chain.

The show can be seen in some old classic movies, including Elvis Presley in Roustabout,  Strangers On A Train, with its famous Merry-Go-Round scene and  Some Came Running which starred Dean Martin, Frank Sinatra and Shirley McClain filmed in 1958.